Should have been off to London today but sadly no 'new year, new me' from our train network - it's still predictably crap in 2022 and scuppered my plans.
and just like that, another year is over!
I don't show my face around these parts too regularly these days. Nevertheless, I did want to pop on and wish you all a Merry Christmas! ⛄
Back in England, made the best of a 12 hour layover in Seattle first though.
A short story about Walla Walla:
Hey Instagram!

Welcome back my dear readers! After my much-needed rant on the football last time out on the blog, it’s back to travel and more importantly the final few days of the “big 3-0” trip.

Those following along will know that in the summer of 2018 I’d planned a trip spending 30 days in the USA which coincided with two friends getting married and also my 30th birthday.

Having run around all over the country, this was to be the last big day on the road. We were making our way back to Haleigh’s apartment in Moses Lake, with Haleigh set to go back to work and for me to see out my final few days in relatively relaxed spirits.

Before thinking about Moses Lake however, we had a full day of driving ahead of us. On the previous night we’d made a relatively unplanned stop in Klamath Fall which was our halfway point from San Francisco – a convenient place to break up two days of driving.

One of the attractions to stopping in this particular area was its proximity to Crater Lake in Oregon. We figured it would be a worthwhile stop on the way home.

I can’t really remember why we skipped it. Much of the West coast was up in smoke that summer (as it is every summer really..) so the conditions at the time weren’t the greatest. That might have been one off-putting reason to skip it but I think we were just keen to get going and get on the road early.

In hindsight perhaps we should have just committed to it regardless of how terrible the conditions were. That said, there’s no doubt that much of our future will be spent visiting the West Coast so it’s hard to imagine us not having an opportunity to return in the coming years.

So skipping Crater Lake, we drove onwards and soon enough found ourselves arriving in a city called Bend. Before knowing what the school schedule looked like we had contemplated staying in Bend for a couple of nights and meeting up with Haleigh’s best friend. In the end it didn’t materialise but Bend still seemed like it would be a good place for us to grab some brunch and we found ourselves a little pancake place on the outskirts of the city.

After fuller stomachs we hit the road again and around half an hour later Haleigh spotted a “must stop” roadside attraction – an alpaca farm with baby alpacas!

Haleigh insisted that we stop so we pulled over and headed in to this little gift shop to pick up a bag of food to feed them.

It’s a funny feeling having alpacas eating out of your hand. It was a first-time experience for me, I’m not sure what I was really expecting. I liked it initially but I think the second or third alpaca I fed was so slobbery that I left Haleigh to it after that. Haleigh laughed at my reaction so it felt like some sweet form of justice when she was getting slobbered on by the same alpaca a minute later. 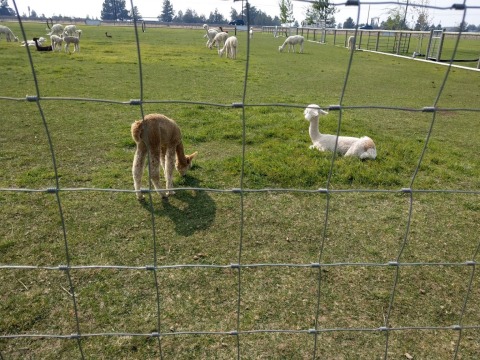 We did a full lap of the farm with Haleigh continuing to feed the many alpacas we met whilst I stuck to taking photos. They’re so cute! Although some of them didn’t seem too impressed that I was wasting my time taking photos when I could have been feeding them instead!

Aside from Haleigh getting sneezed on, it was a fun little stop and I’m glad that we’d pulled over. Sadly we couldn’t stay there all day and had to hit the road again.

The rest of the car journey was pretty uneventful. In parts we could really see how devastating of an effect the forest fires had had on the West Coast with burnt out trees becoming quite a regular sight. It wasn’t really until we hit the Colombia river that the scenery started picking up again.

Soon enough we were crossing back over the river and crossing the Oregon / Washington border for the umpteenth time on this trip. Back in to Washington we knew it wasn’t too much further to go but the long drives of the past two days were taking its toll on Haleigh and that final stretch probably felt much longer than it actually was.

Good music kept us going for that final stretch before we’d eventually arrived back in Moses Lake after another long day of driving. We’d been away for the past few weeks so had no food in the apartment. Additionally we didn’t feel like heading back out for dinner so in the end we settled for ordering a pizza and finishing off our night by enjoying some Netflix.

Again, it hadn’t been a hugely eventful day with the alpacas being an unexpected bonus! However it was just nice to be back in familiar surroundings and sleeping in a familiar bed again after three weeks of sleeping in various hostels, hotels and AirBnB’s.

The last few days would be spent trying to make the most of the little time we had left together in Washington before I’d have to head home.