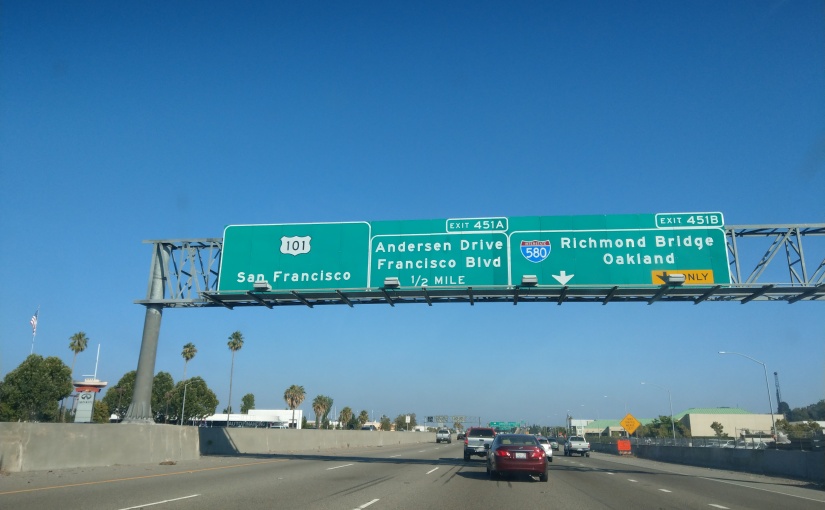 Welcome back my dear readers! I suggested last time out on the blog that I’d try and “up my game” a bit and get two posts out a week going forward. It hasn’t happened haha. Nevertheless I’m determined to get back to posting once a week so I’m cracking on and posting another day of the “big 3-0” trip.

Those of you who haven’t been following (have missed 19 posts!!) will not be aware that this was a 30 day trip in the USA coinciding with my 30th birthday in the summer of 2018.

One of the places that was a must visit on this trip was San Francisco and we were close! Myself and Haleigh were slowly making the drive down from Washington and had just spent the night in Crescent City in Northern California. After a good night’s rest it was time to hit the road again!

We said goodbye to our AirBnB and hopped in the car – heading Southbound once again. One of the reasons we’d stopped off at Crescent City was its proximity to the famous Redwoods and it wasn’t long before we were surrounded by trees towering over us on both sides. 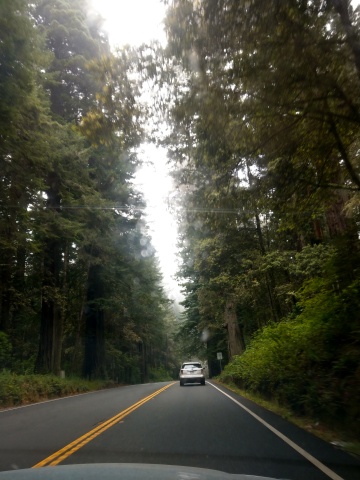 I think I spent the early part of the morning just glued to the window, taking photos and videos to look back at someday. On the other hand, all I could think was “what a place to die..”

Don’t get me wrong, this isn’t some suicidal thinking on my part but with the winding roads, the fog, the towering trees it created that perfect horror-like setting. It was beautiful of course but just a few minutes in to the drive I felt so far removed from civilisation and the rest of the world. You couldn’t help but feel that any minute we’d break down on the side of the road and some axe-wielding maniac would pull over asking if we needed any help.

Fortunately the car was showing no signs of failing us so we kept plodding along until we came to the “Trees of Mystery”. I’d read about this attraction when looking for things to do in and around Crescent City and discovered it was home to a 30ft “Paul Bunyan”.

Haleigh was familiar with the tales of Paul Bunyan but the name meant nothing to me. His fame doesn’t appear to have made it over to our side of the pond but it seems that he is a famous lumberjacker in American folklore and travels around with his trusty companion – “Babe the Blue Ox”.

The giant lumberjacker was difficult to miss on the side of the road so we pulled over and got close up for a few photos of our new friends Paul and Babe. The trees of mystery attraction itself seemed to offer a few trails for hiking but we were content just making it a fun and quick stop.

We got back in the car and as we drove through the forest, the trees just seemed to get bigger and bigger – we were truly in Redwood territory now.

Travel has a way of making your place in the world feel very small but I’d say particularly so here. I was in complete awe of the Redwoods and the surrounding scenery. Even in the midst of forest fires ravaging the West Coast, nature still seemed to be thriving and left me mesmerised.

We passed a sign highlighting the scenic route, which would add a few miles on to our journey, and couldn’t resist the temptation to get off the main highway. We were quite happy to be rid of the traffic and aggressive drivers pushing us to zoom along the winding roads.

True to its word, the scenic route was just that – breathtakingly scenic! We pulled over at one point just so we could properly admire them up close. They’re just incredible! It’s hard to imagine too many other places such as this which really leave you speechless and humbled.

We passed a few other parked cars and consequently a few people who’d seemingly had the same idea we had. Fortunately it meant myself and Haleigh were able to get a photo of the both of us as a nice souvenir and reminder of our time passing through the Redwoods.

Some kids we’d walked past were less enthused by the experience with one retorting that “it’s only a tree..” and clearly not happy that their parents had forced them out of the car. It left me and Haleigh amused and made me realise that sometimes you don’t really appreciate these things when you’re younger.

I envisaged a scenario in the future where the kids would want to return and being mockingly told by their parents that “it’s only a tree..”

Admittedly those kids weren’t wrong. They are “just” trees at the end of the day but as spectacular as you’ll see anywhere. In the company of trees that have stood for hundreds of years, it was impossible to feel anything other than small and insignificant. They’re a must see on any trip to Northern California! 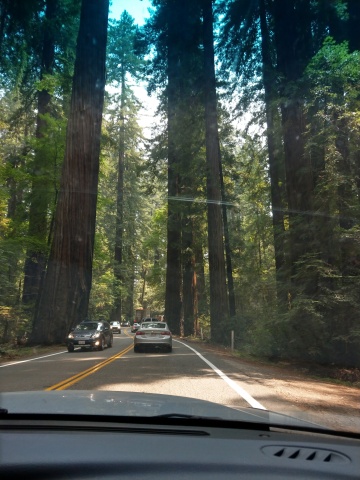 After getting plenty of photos we got back in the car and continued with our journey, leaving the scenic route and returning to what was still a pretty scenic highway. I can’t really remember much else of the drive, I presume we stopped for lunch somewhere but I couldn’t tell you where so it was probably just some fast food of some kind.

The only other memorable stop we made was as we passed by a little roadside shop which had loads of these wooden hand-made bears sat on the side of the road. They were pretty cute and available to buy along with a lot of other hand-made items and art.

It was an interesting little stop. We took some photos with the bears and I also found Pinocchio who told me I was the coolest kid around – I couldn’t understand why his nose was so big though?

The rest of the drive was pretty uneventful. The thing that really struck me was how quiet the roads were in this part of California. At times it felt like we were the only people on the highway which surprised me – particularly in the summer months but it seems that all of that famous California traffic is reserved for the big cities such as Los Angeles.

The roads started getting busier as we got closer to San Francisco, particularly around Santa Barbara, but even then a good chunk of the highway has a carpool lane which you only need two people to take advantage of so we were flying past all of the single-drivers on the road. Soon enough we were seeing signs for San Francisco and then the golden gate bridge!

We hadn’t really hit any traffic all day but as we approached the tunnel which leads to the Golden Gate bridge things started slowing down and we came to what was almost a stand still. It probably wasn’t the ideal time for us to be arriving in to San Francisco, albeit unavoidable. That said, I have a feeling that the traffic in to this part is probably always like this.

Not that the locals seemed to have the patience for it – the car honking was endless! Puzzling too, where exactly do you want us to go? In to the back of the car in front of us?

Oddly enough, Haleigh was unwilling to partake in a game of road rage and smashing in to all of those who blocked our path. Instead we crawled along at a snails pace – which was actually fine by me!

At the end of the tunnel I could peek my first glimpse of the golden gate bridge! I was so pleased that we were traveling in over the bridge itself – even better that we were slow-moving and I could really take it in and appreciate it in all of its glory.

This was the Sydney Opera House, Eiffel Tower, Big Ben “pinch me” moment of San Francisco – there was no doubt as to where we were! We’d made it! We’re really in San Francisco!!

I managed to grab a bunch of photos before we eventually escaped the bridge, however there was no sign of the San Francisco traffic easing up. I don’t know why you’d want to drive in a city like San Francisco, much like New York City or London you have to question if it’s even worthwhile being on the road.

Karen, our handy sat-nav, guided us to our AirBnB where we parked up and awaited for our AWOL host to arrive. As it was, she was only in the back garden so not too far away and was quickly letting us in to show us around. We had no intention of driving whilst in San Franciso so swapped the cars around – putting Haleigh’s car in to the garage whilst our host moved hers in front of the garage.

It had been another long day of driving so we didn’t really have any plans for our first evening in the city. Had we been closer to downtown San Fran perhaps we’d have gone and explored but we just settled in to our AirBnB and familiarised ourselves with the local neighbourhood.

In essence we were staying in an unofficial Chinatown. The area was full of restaurants offering Asian cuisine, with a Sushi restaurant on the corner of the street we were staying on. It was far enough away from touristy San Fran that it felt very local and is undoubtedly one of the perks of AirBnB life – this being only my third AirBnB stay – all three of which were on this trip.

We went and checked out a nearby Chinese restaurant which had some good reviews on Google. On appearance it’s probably not somewhere I’d have walked in to, more reminiscent of your typical kebab house you’d stumble in to at the end of a night out.

Nevertheless, appearances can be deceiving and the food was really good. Although I’d originally ordered a duck-dish and they were then out of duck, not that I could complain about my second choice. If there was to be any complaint it would be that there was just too much of it!

Both me and Haleigh struggled to finish our meals and agreed we could easily have shared a meal between us – it felt a bit of a waste to leave so much unfinished. Brilliant value though as it was not only delicious but pretty cheap too.

Following on from dinner we had a wander through the neighbourhood but didn’t go too far. It was beginning to get dark and for the first time this whole summer, it was cold!

Whilst San Francisco was warm by day, it quickly became apparent that you’d need a jacket in the evening as it got quite chilly. Having had a small glimpse we headed back to our AirBnB for a relaxing evening and started making plans for tomorrow – our first full day in San Francisco!