Parents sharing selfies drinking beers in Budapest, brother-in-law sharing selfies drinking beers in Gibraltar, I figured I'd send back a mid-work selfie drinking tea to make them all jealous! 😂
Five years ago today I went out to Washington to meet some friends for the first time.
One year ago I made my first trip to Ireland! Apparently I only shared six photos of that trip on Insta so here's a little flashback and a few more that Insta never got to see! 😊
04.09.22!
and that's that! 😭
I don't think I ever shared this one here.

Day one in Amsterdam had been a bit low-key, I spent a chunk of the day traveling and being December it was already dark by the time I’d arrived late-afternoon. It was also pissing it down with rain which meant there was only so much exploring I wanted to do on my first evening.

So I woke up relatively early on the Wednesday morning keen to make the most of my first full day in the city. Amsterdam is just one of those places that wins you over pretty quickly. In December you have a lights festival sprawled over its canals which makes it look spectacular after dark but it turns out it’s no less impressive by day either.

After Tuesday evening’s miserable downpour I was pleasantly surprised to wake up to blue skies, hopeful they’d last and make exploring the city a little more enjoyable. I wanted to kick my day off with a ‘free’ walking tour of the city. I find these are useful for familiarising yourself with a new city, see a few of the sights and learn a bit about the city in the process.

I’d got out in to the streets a bit earlier than anticipated though and the starting point wasn’t as far from my hostel as I thought either so I arrived far too early, giving me a chance to have a little wander nearby beforehand.

As I strolled along one of the canals, admiring Amsterdam’s beauty, I was caught by surprise and pretty much jumped out of my skin.
Just to my left was some woman, stood inside with only her underwear, knocking against the window. She was waving me in for a cup of tea I think but I politely declined and moved along, a little surprised that the women of Amsterdam were looking for company so early in the day. It can only have been around 9-9:30 in the morning so I wasn’t expecting it.

Soon enough I wandered back towards the starting point for the tour, you’ll find New Sandemans based in a lot of European cities offering ‘free’ walking tours (you tip what you like after). I quite enjoy their tours and this was another decent effort as we wandered along Amsterdam’s canals and got a bit more insight in to the history and quirks of Amsterdam. This particular spot on the tour was nicely hidden away and not too busy.

I’d pre-booked the Anne Frank House museum for later in the day so had a bit of time to kill after the walking tour. I didn’t really have anything planned so just wandered aimlessly for the next couple of hours.
It’s recommended that you pre-book for the Anne Frank House and I passed the building a couple of times throughout my trip and the queues were fairly lengthy. It’s also suggested that Wednesday is the quietest day to visit and it showed when I arrived, I had sensibly pre-booked but there wasn’t actually much of a queue at the time I went anyway so I probably could have got away with not booking in advance.

This was really the one thing I’d wanted to do in Amsterdam and I can’t say that it disappointed. I thought the museum as a whole was really well done and is a credit to the memory of Anne Frank and the horrors of that time. I can’t say I enjoyed it as such because it’s not one of those experiences you enjoy but I came out feeling educated, humbled and sombre which is what you hope to take away from a place such as this. It’s somewhere you should make time to visit if you’re in the city. 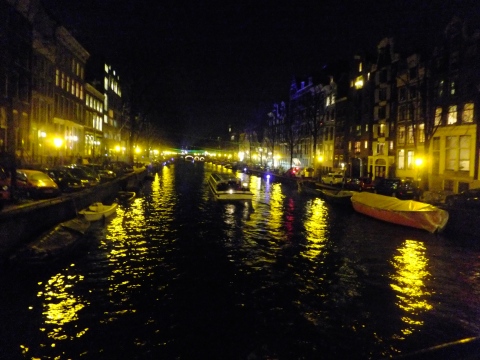 Whilst it wasn’t overly late, it was pretty dark by the time I came out so after a little stroll through the city I went and found myself some dinner to round off a rather enjoyable second day Amsterdam. The route back to my hostel afterwards took me by Amsterdam’s Red Light District and whilst I’d had a brief introduction to it earlier in the trip, I have to say it’s a part of the city that surprised me a little. I had this image of it being this seedy little district full of old men or stag-do’s leering over women in windows but it’s as far from that as possible.

I’m sure there is that element there but surprisingly it’s a real tourist trap, there’s a little buzz to the area at night. I wasn’t looking to do any “window shopping” but the whole area was just crawling with tourists, at times it felt like they were literally crawling.

“Can you please either walk quicker or get out of my way!”

If you actually want to get anywhere it’s an area best avoided, in theory passing through it should have made my route quicker but I spent most of my time hurdling tourists that were just dawdling along.

The red lights reflecting over the canal added a little atmosphere to the area, I didn’t ever at any point feel unsafe or uncomfortable passing through it. Perhaps the legalisation of the prostitution and having it (all) on display makes it somehow seem a little less seedy but beyond the hordes of people it’s a relatively nice part of the city to walk through day or night.

After finally escaping the crowds I made my way back to the hostel and thought I’d give the hostel bar another effort, hoping for a bit more luck at making friends than I’d had the night before. Again it seemed the height of the social activity was in the smoking room which, even in Amsterdam, has never had any appeal to me.
Following a couple of beers I headed up to my dorm, contemplated how I’d spend my final full day in Amsterdam and got myself some sleep ahead of another fun-filled day in the city to come.